I have a new essay in 3:AM Magazine called “The President’s Bucket.” It’s a hybrid piece that includes a dark fable. I wrote it at the invitation of Andrew Gallix for the journal’s ongoing “3:AM in Lockdown” series.

My contribution was the forty-fifth in the series, among artworks, writing, videos and more by a fantastic group that includes Joanna Walsh, Joseph Schreiber, Rachael de Moravia, Anna Vaught, and Steven J. Fowler. I’m finding it to be essential reading for two main reasons. First is that it shows of course the current state of the world during the coronavirus shutdown. But it also reveals how creative people are getting by, while taking care of themselves and their loved ones, while somehow generating new work.

END_OF_DOCUMENT_TOKEN_TO_BE_REPLACED

My, oh my, how the months fly by. Last I posted it was winter and now it’s fall again. Three seasons later, I have three things to share.

I’m very pleased to have published two new story-reviews this year. These are my experimental book reviews, or critifictions, as I call them sometimes. (A friend of mine said he thinks I might have invented this form/genre? Hard to say. Who knows?)

END_OF_DOCUMENT_TOKEN_TO_BE_REPLACED

The experimental work I posted about not too long ago not only has a name now, “corner of the world,” it was published (!) by 3:AM Magazine this week. (Many thanks to 3:AM poetry editor Steven J. Fowler.)

It’s three photos, of page fragments. Some photos are photos of a torn photo, repeated a couple times. The page fragments were torn from an uncorrected advance proof of a novel, which I reviewed (favorably, I should add). So no “art,” author’s reputation, or publisher’s investment was done any malice to create this. END_OF_DOCUMENT_TOKEN_TO_BE_REPLACED

What motivations shape a critic’s decisions to write about the books they defend and those they dismiss? And what are the ethical or moral dimensions of those decisions? Beyond mere conflicts of interest, what lines do they draw for themselves in their work? Are there personal forces or experiences that affect their preferences about what to read and review?

In this ongoing series of interviews with critics, one of the central questions will be, “What is a critic’s role?”  It’s a broad question, open-ended, but one which can be used, if the critic chooses, to address the personal side to their lives as critics, and perhaps how they see their work affecting society and culture.

For the second post in this series, I’m very pleased to present an interview with David Winters. Our conversation took place over email in recent months.

David Winters is a literary critic living in Cambridge, England. His reviews, essays and interviews have appeared in a wide variety of print and online publications, including the Times Literary Supplement, The Guardian, The Literary Review, The White Review, The Quarterly Conversation, and the Los Angeles Review of Books. A collection of his literary criticism, titled Infinite Fictions, is forthcoming from Zero Books in January 2015; it can be pre-ordered here. He is currently co-editor in chief of 3:AM Magazine, where he commissions criticism and nonfiction. He can be found online at davidwinters.uk. 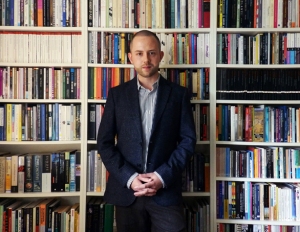