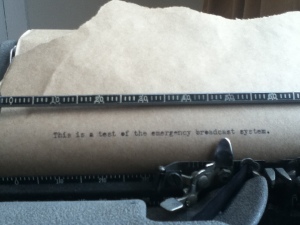 Bookstores sustain me–it’s an obvious statement to look at it, but perfectly true. When I first moved to Philly back in 2008 I didn’t feel comfortable until I learned where the bookstores were, first those in my neighborhood, and later on all the other ones around the city. (There are so many good ones and I’m devoted to so many I won’t name a whole bunch because it’ll turn into a silly game of favorites!) I even organized and led an independent bookstore crawl about five years ago. It was so much fun and I hope to do another one some day.

For me these are places where special things will always happen, where I’ll return over and over again, often to get away from things I think I need to avoid for a while, and of course I get to meet folks there and chat and learn about great books or just random things I’ve never heard of.

So being a bookstore sort of person it was inevitable that I’d eventually write at least one short story about them and try to get at what they mean to me, or a version of me. Recently, Jared Daniel Fagen, founder of Black Sun Lit, was kind enough to publish my flash fiction, “A Thousand Lives,” about bookstores, desire, and in a way, eternity. (A certain West Philly bookstore plays an anonymous role in it.)

Black Sun Lit has an impressive archive of online work to explore, and the first issue of their print journal, “Vestiges,” is forthcoming.

Thanks for taking a minute to check out the story. It’s fiction, but entirely true in many ways, too, of course.